The Aim Higher Foundation is pleased to announce that Ricky Austin has been named Director of Programs and Communications effective May 23, 2017. A twelve-year veteran of the Catholic education sector, Austin brings considerable knowledge and experience in the areas of school- and system-level marketing, public relations, program management, and advocacy.

“Ricky has a wealth of strategic and tactical experience in working to revitalize Catholic schools at every level,” said Karen Rauenhorst, chair of the Aim Higher Foundation board. “From his years as a teacher and school administrator to his time leading local advocacy and national communications efforts, he has demonstrated a passion for ensuring Catholic schools are accessible to every family who seeks to send their child to one. The search committee was thrilled to extend the invitation to bring Ricky to the Aim Higher Foundation.”

In the new role, Austin will oversee all scholarship programs and foundation operations while working closely with representatives from local Catholic schools to ensure efficient delivery of tuition support to students with demonstrated need. He will also lead the foundation’s marketing, communications, and public relations, and represent the foundation on issues of public policy. 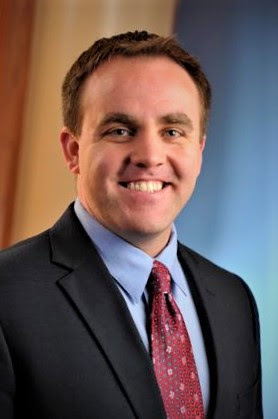 Austin, a graduate of the University of Notre Dame, began his career as a Catholic school teacher in Oklahoma City as part of Notre Dame’s nationally-recognized Alliance for Catholic Education (ACE) Teaching Fellows. Upon completion of the two-year service program and his Master of Education, he continued teaching and took on administrative and marketing responsibilities at a Catholic elementary school in Chicago. He also began his work in advocacy, partnering with a volunteer group and the Archdiocese of Chicago to provide professional development to teachers and scholarship support to students in local Catholic schools.

In 2010, Austin returned to Notre Dame to lead ACE’s digital communications and support its work to build a national movement in service to Catholic schools. He later became head of ACE’s communications team. In that role, he oversaw the strategy, tactics, systems, and processes for ACE’s marketing, brand development, recruiting, and public relations efforts. Most recently, he served as Senior Director of Communications at Partnership Schools, a network of Catholic schools serving more than 2,100 students in Harlem and the South Bronx.

Austin and his wife, a Minnesota native, recently moved to the Twin Cities with their two young children. You can reach him at ricky.austin@aimhigherfoundation.org.

About the Aim Higher Foundation:
The Aim Higher Foundation is an independently operated, non-profit organization committed exclusively to the betterment of children through Catholic schools in the 12-county Twin Cities metro area. The simple premise that all children deserve the opportunity to aim higher serves as the core principle of the Foundation, which believes that Catholic schools can make a profound difference for our children and our communities by providing an education characterized by academic rigor, discipline, and character development in a faith-centered environment.

The Foundation is governed by a Board of Directors comprised of corporate, community, and education leaders who seek to ensure the future strength of Catholic schools through student-based tuition assistance.